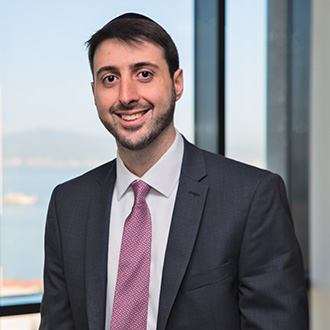 Michael joined Hassans as a Trainee Solicitor in September 2021. He is currently undertaking his first seat as part of the Property Team where he is gaining valuable experience in both residential and commercial property, as well as Landlord and Tenant matters. He works closely and under the guidance of Partners Ian Farrell and Nicholas Howard.

Whilst studying at a research institute of Talmudic Law in Jerusalem, Israel, Michael obtained a BSc in Liberal Arts and then took the Graduate Diploma in Law at BPP University, subsequently completing the LPC at the University of Law.

Prior to joining Hassans, Michael worked at various London firms as a paralegal.

In his spare time, Michael enjoys spending time with his young family.