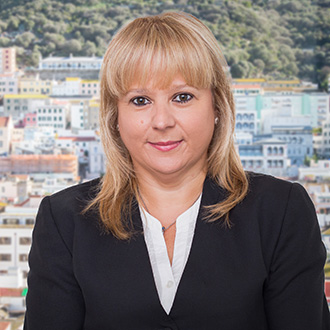 A regular advocate before the local courts, Gillian has represented clients at every level, both leading the case and as junior counsel to Leading London Counsel, most notably Mr Edward Fitzgerald KC, in Gibraltar’s largest fraud trial.

Gillian’s experience also extends to the UK where she has appeared as junior to Leading Counsel before the Privy Council.

In 2004, Gillian chaired the first Human Rights Symposium ever held in Gibraltar, which was facilitated by the Gibraltar Judiciary. On the subject of the Human Rights of the Child, Gillian has sat as a fellow panelist, alongside such eminent members of the legal profession as Dame Elizabeth Butler Sloss (UK), Lady Justice Angawa (Kenya) and Mr Nicholas Critelli (US).

In the last years Gillian has been kept busy advising clients such as the Gibraltar Health Authority on various aspects including the implementation of policies and legislation and in employment related issues. Gillian is also closely involved in advising the TGWU in both employment and personal injury matters and also in advising many of the top gaming companies on employment related matters. In 2006 she was appointed Chairperson of the Industrial Tribunal.

In March 2012 Gillian was honoured to receive an appointment to Queens Counsel. Not only is Gillian Gibraltar’s first female QC, but she is also the jurisdictions’ youngest appointee to date.