“We listen to our clients, understand what they want to achieve from a case and then seek to provide them with practical legal advice and a roadmap to try and resolve the matter in a satisfactory way.” 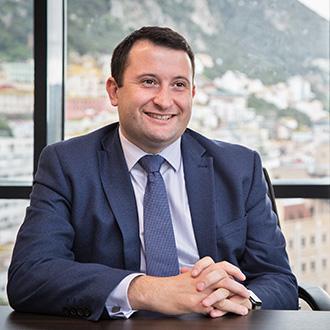 Darren joined Hassans in October 2011 and was made Partner in the firm’s litigation department on 1st July 2021.

Darren has a busy and varied practice across most of the department’s practice areas with a particular focus on commercial, insolvency, construction and crypto-currency/distributed technology ledger law. He appears regularly in the Supreme Court of Gibraltar. He has also appeared (as a junior) in the Court of Appeal for Gibraltar. Darren has experience appearing before statutory boards and tribunals, including the Development and Planning Commission, the Parole Board and the Business Licensing Authority where he acts for both applicants and objectors.

Darren was listed as a “Rising Star” in the Dispute Resolution category in the 2020 edition of the Legal 500.

Darren is developing a broad practice in commercial and insolvency matters. He also has experience making various types of applications under the Companies Act 2014 and Insolvency Act 2011.

Darren has a developing practice dealing with crypto-currency and DLT litigation work. Darren has advised clients following the loss in investment funds due to alleged leakage of coins, contrary to the vesting schedule. Questions include the legal status of a White Paper and issues surrounding the late amendment to vesting schedules prior to the Initial Coin Offering.

Darren has been involved in a number of construction cases acting for both developers and contractors, including:

Darren also has experience appearing before the Development and Planning Commission, the decision-making statutory body which considers applications for planning permission in Gibraltar.

"a valued part of the team and a great support to partner Daniel Feetham QC. He is fully informed of matters and easily accessible."
Legal 500 EMEA 2021