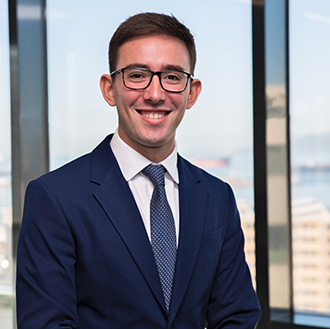 Sam joined Hassans as a Trainee Barrister in September 2021.

He undertook his first seat in Hassans as part of the Litigation team, working closely with the Partners on the team and under the guidance of Lewis Baglietto KC and Moshe Levy, on a range of civil and criminal matters. He then completed his next two seats working in the Corporate and Commercial team under the guidance of Vikram Nagrani and Grahame Jackson. During that time, Sam assisted with a wide range of commercial matters and had a special focus on Gibraltar tax law.

Since then, Sam has returned to the Litigation Department and has re-joined Lewis Baglietto KC and Moshe Levy’s team.

Sam read Law at University College London (UCL) and graduated with First Class Honours, top of his class, in 2020. He was honoured three prestigious academic awards from the UCL Faculty of Laws including: the John Frederic Whitehouse Essay Award for the best dissertation and The Chartered Institute of Tax, London Branch, Prize for Taxation. He subsequently completed the BPC LLM at the University of Law obtaining a distinction. He was then called to the Bar of England and Wales in November 2021 by The Honourable Society of the Middle Temple.

Sam also graduated top of his class from the Professional Certificate of Competence in Law course, delivered by the University of Gibraltar, and was class representative during that year.

Sam thoroughly enjoys following politics and has appeared twice on BBC News regarding Brexit. He is also an avid sportsman and has represented Gibraltar internationally playing 5-a-side football. Sam passionately enjoys fishing and is the Spokesperson for the Gibraltar Tuna Fishing Club.