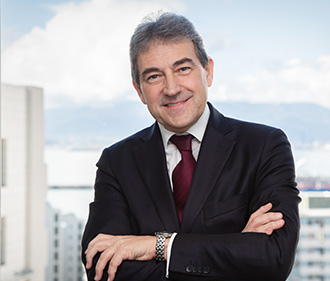 Peter Montegriffo is a Consultant at Hassans and a member of the firm’s Corporate & Commercial team. He is also the team leader of the firm’s Gaming team. On 12 June 2014, Peter was appointed as King’s Counsel in Gibraltar.

Peter’s area of expertise is in commercial and private client matters. He has also advised on numerous financial services, regulatory and trust-related matters. Peter was closely involved in the IPOs of various gaming companies established in Gibraltar, which have been listed on the London Stock Exchange. He now advises regularly on commercial, merger and consolidation exercises.

Peter regularly speaks at international conferences relating to these areas of practice. His work frequently requires him to deal with multiple jurisdictions as a result of which the firm has built a considerable bank of international knowledge in tax and private client arrangements.

He is a member of the pre-eminent global gambling law networking and educational organization, International Masters of Gaming Law. IMGL is at the forefront of the latest developments in international gambling law.

Peter was also Gibraltar’s Minister for Trade and Industry, with responsibility for economic development and financial services, between May 1996 and February 2000. Having graduated from Leeds University, Peter attended the Inns of Court School of Law as a member of Lincoln’s Inn. Peter qualified as a Barrister in 1982, becoming a partner of Hassans in 1988.

"Peter Montegriffo takes a very pragmatic approach and considers all aspects and angles of any assignment thinking outside the box and producing very valuable advice."
Legal 500 EMEA 2021
""leading figure in the gaming industry"; "a real expert in the sector"; "very responsive and happy to help." "
Chambers and Partners Global 2021
"very well respected"; "very knowledgeable in Gibraltarian law."; "He is a go-to for Gibraltar because he knows the regulators better than anyone."
Chambers Global (2020 Edition)
"very knowledgeable about trusts matters."
Legal 500 (EMEA 2020)
"Highly respected", "figurehead for the firm in the local market", [the] "guru of Gibraltar gambling law", "instrumental in drawing Gibraltar forwards into the regulated space.", "super, a very assured person and very impressive."
Chambers Global (2019 Edition)
"Peter's area of expertise is in commercial and private client matters. He has also advised on numerous financial services, regulatory and trust-related matters."
Legal 500 (EMEA 2019)
"Assists clients with capital markets and gaming-licensing matters as part of a broader corporate practice. He is described by clients as 'sharp and astute.'"
Chambers Global (2018 Edition)
"Peter is an eloquent speaker and a strategic thinker...he is meticulous and has a knack for simplifying complicated issues."
Chambers Global (2016 Edition)
"Completely assured"
Legal 500 (EMEA 2016)
"Maintains a tremendous reputation among clients and peers for his strength in corporate and commercial advice to the gaming industry."
Chambers Global (2015 Edition)
"Has made the area his own"
Legal 500 (EMEA 2015)

In My Opinion – Peter Montegriffo

Very shortly after the 23rd June 2016 Brexit vote, I bumped into my since sadly departed political friend (and occasional adversary), Juan Carlos Perez.  On this day our analysis was […]