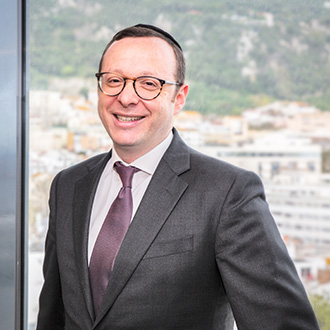 Moshe has a busy litigation practice, involving a number of areas of law including Public Law and Criminal Law, and Landlord and Tenant/Property, commercial and trust disputes. He appears regularly in the Gibraltar Courts and tribunals on these matters as well as being instructed on commercial and trust advisory work.

Moshe has also been very involved in Mutual Legal Assistance proceedings (which is an area of law rapidly growing in Gibraltar) appearing for Defendants in the Supreme Court in relation to production orders requested by EU Member States, and successfully challenging the grant of such orders.

He has also advised on defamation, employment, bankruptcy and insolvency proceedings and on legislative drafting in relation to public law issues and has picked up invaluable knowledge in these areas.

He combines technical knowledge and ability with an approachable manner to offer clients a well rounded service.

Moshe came to law after achieving 1st class honours in a BSc which he converted into a law degree. He obtained an ‘outstanding’ for his Bar finals and began practice in London, where he was involved in some very big cases including a ground-breaking Privy-Council case in January 2013; Crawford Adjusters v Sagicor General Insurance (Cayman) Limited (2013) UKPC 17.

Moshe has co-authored a chapter on international fraud investigations and other articles in the local media. He also co-authored the Gibraltar chapter of the ‘Enforcement of Foreign Judgments’ textbook. He is active in the local community and was a member of the Gibraltar Health Authority Complaints Review Panel. He has also advised on a number of pro-bono matters which he has brought to successful conclusions.

He recently successfully represented a senior accountant on fraud charges, who was found not guilty in a landmark judgment in the Supreme Court of Gibraltar.