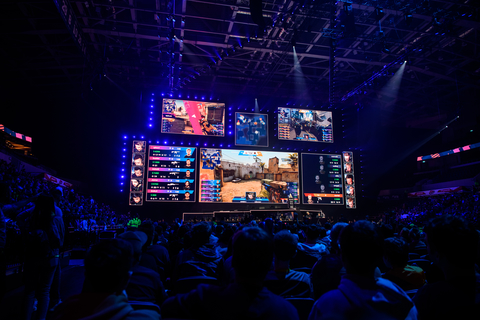 Once confined to the bedrooms of teenagers, video games have grown to something much larger in recent years. Whether it’s LAN parties, personal entertainment systems, augmented reality, or their part in mainstream movies and TV series, the whole industry has been transformed and is continuing to change at a fast pace.

Around the world, traditional sports stadiums and arenas are now regularly packed with fans who turn up to experience their favourite professional video game players competing against each other in organised multiplayer competitions.

The rise of the professional gamer

In recent years, it has come even further to the forefront. Kyle ‘Bugha’ Giersdorf, a 16-year-old from Pennsylvania (US), made global, mainstream headlines by winning the inaugural Fortnite World Cup taking home a prize of an incredible $3 million. Over 19,000 people attended the sold-out three-day event which was watched by millions of people online.

According to a report from Newzoo, a leading provider of intelligence and analytics focused on the interactive entertainment market, the esports industry has grown at a remarkable pace from $493 million in 2016, to $655 million in 2017 and reaching $1 billion in 2019. And esports has only grown over the course of the pandemic.

In addition to attending live events, tournaments are also streamed live via platforms such as Twitch, YouTube Gaming or dedicated event-specific platforms (such as for Blizzard Entertainment’s BlizzCon). However, esports are far from confined to stadiums and live events. Most competitions occur online, where the need for venues and other organisational burdens does not exist.

Players compete individually or under contract as part of teams and large organisations. Amongst the most popular esports titles, first-person shooters (FPS) such as CS:GO (the title featured at ICE), multiplayer online battle arena games (MOBA) such as Riot Games’ League of Legends, and real-time strategy (RTS) such as Starcraft (the Blizzard Entertainment masterpiece that is considered by many as the ‘father’ of all esports) feature prominently.

In addition to esports, millions of people tune in daily to watch their favourite streamers provide entertainment playing video games on platforms such as Twitch and Mixer. Streamers build up dedicated followings of fans by combining their gaming skill with entertaining styles and personalities to create highly engaging experiences for viewers.

The fan base, support and cultural influence of the world’s top streamers (such as Ninja, Tfue and Shroud) rivals that of traditional sports stars and mainstream celebrities. Through a combination of advertising revenue, subscriptions, donations and sponsorship deals, game streaming can be a highly lucrative profession.

Gibraltar offers a great environment for interactive entertainment and esports organisations to thrive by leveraging off existing infrastructure and experience from supplying and servicing the needs of the well-established gaming and fintech industries. It can offer:

Gibraltar is an attractive jurisdiction due to its ability to understand, meet and encourage innovation in emerging industries in a relatively short period of time. The comparatively small size of the jurisdiction allows for close cooperation and liaison between key decision-makers and stakeholders and encourages a real understanding of the needs of nascent industries. This can lead to the development of robust but practical legal and regulatory frameworks in short time. By establishing such frameworks efficiently and with direct input from stakeholders, Gibraltar can help develop industries and set high standards of practice. Gibraltar has been able to provide businesses with ‘speed to market’ without comprising on transparency and accountability.

This attitude towards innovation makes Gibraltar the ideal location for the formation of new industry hubs. The jurisdiction hosts one of the most important global online gaming hubs, with companies such as GVC, Playtech, William Hill, Lottoland and 888 (amongst others) firmly established here. In addition, the same phenomenon is now occurring in respect to the fintech industry with players such as eToro, Xapo, TokenMarket, and CEX (to name a few) obtaining DLT licences and setting up significant physical footprints in Gibraltar.

Gibraltar’s tax regime is highly competitive. Corporate tax is set at 10% of profits accrued in and derived from Gibraltar. Income tax for individuals is levied on a sliding scale and is also competitive with special incentives for those with specialist skills.

Gibraltar has no capital gain tax, no wealth tax, no VAT and no inheritance tax. In addition, in order to incentivise and encourage top talent to Gibraltar, certain individuals may also benefit from the HEPSS (High Executives Possessing Specialist Skills) regime. Individuals who qualify for this tax status have a cap on their annual gross assessable income to the first £160,000 per annum (which currently translates to a total tax liability of approximately £43,140).

Service level standards in Gibraltar are extremely high – most professionals are trained and qualified in the UK. Whether you are dealing with lawyers, accountants or other corporate service providers, the Gibraltar workforce is generally highly skilled and professional.

Being the very door to the Mediterranean, Gibraltar also offers very high standards of quality of life. Good weather all year round, fantastic food, rich history, religious tolerance, a plethora of outdoor activities (being on the seaside and only two hours away from skiing resorts) and more with Spain, Portugal and Morocco at your doorstep.

We are a full-service legal and fiduciary firm able to advise and support you whatever your goals. In addition to playing fundamental roles in the creation and development of the online gaming, fintech and DLT industries, we have experience within the esports and interactive entertainment sectors. We advise professional esports players, streamers and content creators on a wide range of matters and were instrumental in establishing the Gibraltar Esports and Video Gaming Association (GEVGA). The firm also has extensive experience with traditional sports related matters (including, for example, representing the Gibraltar Football Association on a wide range of issues including its dealings with UEFA and FIFA).

For further information or to arrange a catch-up, please contact: