"Service is being able to respond quickly, competently and cost-effectively in meeting the interests of our worldwide clients at every level." 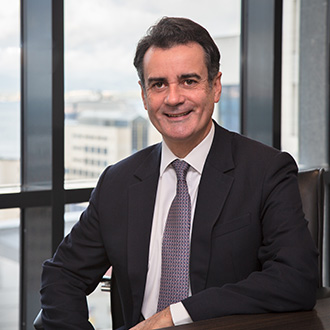 Lewis Baglietto is a Partner at Hassans and Head of the firm’s Litigation Department. He is also a member of the firm’s Shipping Team and is the lead partner for Contentious Shipping work.

Lewis read law at King’s College London and at the Inns of Court School of Law. He was called to the Bar of England and Wales and the Gibraltar Bar in 1986 and joined the firm that year. He became a partner in 1993 and Head of Litigation in 2003.

On 12 June 2014, Lewis was appointed Queen’s Counsel in Gibraltar.

His practice over the years has been wide-ranging, with a strong emphasis on international commercial disputes, maritime law and administrative law.

He has been involved in many of the leading Gibraltar cases in these areas over the past 25 years, acting for a wide range of local and overseas clients, including private individuals, corporations, Banks, Trustees, accountants, local and overseas state authorities, as well as international organisations. Many of his cases are reported in the Gibraltar Law Reports.

He has also appeared in cases of European significance in the European Court of Human Rights and the Privy Council.  These include Bols v Superior Yacht Services [2006] UKPC 45, a leading case on jurisdiction agreements in a EU context and, French v Public Prosecutor of Central Department of Investigation and Prosecution in Lisbon [2013] UKPC 16, a case interpretation concerning the EU Framework Decision on the European Arrest Warrant.  In 2017 he appeared before the Grand Chamber of the Court of Justice for the European Union on behalf of the applicants in the first reference from the Courts of Gibraltar for a preliminary ruling on EU law.  The case, C-267/16 Buhagiar & ors -v- Minister of Justice, concerned the applicability to Gibraltar of the Firearms Directive but also served to clarify and confirm the wider scope of Gibraltar’s exclusion from the EU Customs Union and the EU Treaty provisions on Free Movement of Goods.

During 2020-21, Lewis has been involved in a wide range of commercial and maritime cases. These have included the recovery of funds arising from a cyber-attack on a foreign bank, a high‑profile case involving a collision between 2 luxury yachts, an oil pollution incident and a highly contested application to court for the final distribution of trust assets.  He has also been acting for the Republic of Kazakhstan in relation to the registration in Gibraltar of certain judgments of the English High Court.   In the past year, he has given expert evidence on Gibraltar law for cases in the Courts of England and the Bahamas.  He was also recently called as an expert witness on Gibraltar law in a major international arbitration in the energy sector.

Lewis holds and has held a number of public appointments in Gibraltar, including that of Chief Charity Commissioner.

He is consistently ranked as a “Leading” or “Band 1” litigator by major international lawyer directories and is commended for his “hands on” approach to cases.  One directory source described him as being “every bit as good as his counterparts in London.”