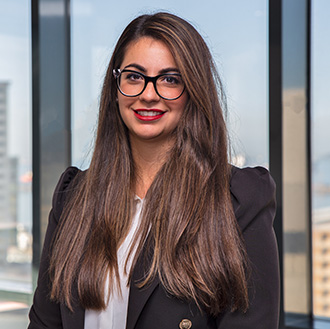 Grace specialises in general civil litigation. Her areas of expertise are family, personal injury and clinical negligence. Grace also has experience in Court of Protection applications and has represented clients in complex matters before this Court. In addition, Grace has frequently represented clients in criminal matters both in the Magistrates Court and in the Supreme Court. She has also appeared before the Court of Appeal as a junior in a matter of high importance concerning the interpretation of the Companies Acts of 1930 and 2014.

Grace graduated with a First Class LLB Hons at Aberystwyth University in 2013 and subsequently completed the BPTC at Northumbria University in 2014. In 2010 she was awarded the Calcott Pryce Subject Prize for both the Criminal Justice and the Penal System and Human Rights – Theories, Institutions and Remedies. In 2014 Grace was awarded the Baron Dr Ver Hayden de Lancey Prize by the Honourable Society of the Middle Temple.

Grace was called to the bar of England and Wales in July 2014 and to the Gibraltar Bar in December 2014.