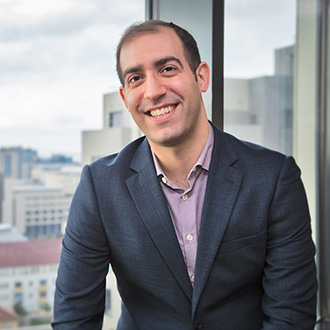 Gideon Myers is an Associate in Hassans’ Corporate & Commercial Department.

After completing a training contract at Manchester commercial law firm, Kuits Solicitors, in March 2018, Gideon qualified into the Real Estate team at multinational firm Eversheds Sutherland in Manchester, before relocating to Gibraltar and joining Hassans in September 2018.

Gideon graduated with an LLB (Hons) degree (2:1) and completed the Legal Practice Course with distinction at the Manchester Metropolitan University. He is a Member of the Law Society and has been admitted to practice in England and Wales since March 2018.

He completed his professional certificate of competence in Gibraltar Law at the University of Gibraltar in June 2019, and was admitted as a solicitor of the Supreme Court of Gibraltar in December 2019.

Outside the office, Gideon’s two young children, combined with a compulsion to follow the fortunes of his beloved Manchester United, keep him occupied. Gideon also enjoys playing five-a-side football, reading and is partial to the occasional dram of single-malt whisky.