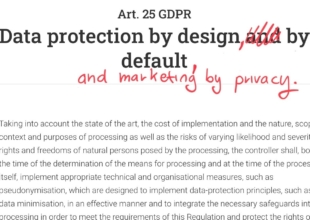 With today’s headline (4.3.21) Google joins in the new marketing trend adopted by the likes of Apple, Snapchat, Signal and Telegram. More and more companies are moving away from viewing privacy and data protection as a burden and more towards viewing it as an opportunity to build trust, and consequently, a stronger relationship with their customers.

Recent developments in privacy and data protection laws have been particularly impactful on consumer network providers (CNPs) such as Facebook, Instagram, YouTube etc. CNPs often provide users (NB the intentional use of the term ‘users’ rather than ‘customers’) with free access to their platforms.

It is possible to argue that, in this particular business model, the users are not the customers but rather the products. To simplify, CNPs could be considered as advertisement boards – only much more sophisticated and powerful. Their economy revolves around getting to know their users and providing advertisers with a very valuable service: data on which to base their targeted advertisements. The more data the CNP has on a user, the better value it can provide to the advertiser.

Advertisers rely on users’ data to ensure that adverts are as relevant and tailored as possible to the users’ interests. Hence the argument that CNPs’ customers are not their users but rather the advertisers themselves.

To use a more relatable example, think about when you had to buy presents for your colleagues and ended up relying on the advice of their closest friends or partners (e.g. Secret Santa). Similarly, advertisers rely on the suggestions of CNPs to understand which products could resonate most with a user. The difference is that, unlike your colleague’s friends, CNPs charge a fee for their suggestions, as that dramatically increases the chances for the advert to drive a sale.

Consequently, it is easy to understand why users’ data is fundamental to CNPs’ economy. The more obstacles that are placed between the CNPs and users’ data, the harder it is for these CNPs to monetise their user base. Importantly, these measures are not likely to go away or become more lenient.

In fact, recent scandals such as the one surrounding Cambridge Analytica fuelled public interest in the right to privacy, which is overwhelmingly evidenced by the success and engagement of the public with content such as ‘The Social Dilemma‘. Consequently, public demand for appropriate measures will likely result in higher privacy and data protection standards which, in turn, is likely to result in more stringent measures around the use of users’ data by CNPs.

With that said, an increasing number of companies are adopting a pragmatic approach by realising that privacy presents a valuable opportunity to build (or recover) trust with their users.

From Apple’s Privacy campaign and commitment to drastically reduce Apps’ access to your data, to Google’s (re) statement that it will eliminate third-party tracking cookies – the message (and appeal for trust) to the end-users is clear.

That brings about the question: will that work?

Well, it would appear so.

We can say with a degree of confidence that users (at least the more adult demographic) do care about the privacy of their information (see the WhatsApp-2-Signal migration). Therefore, the more privacy is offered to the users, the more the users should engage with the product.

However, it is important to consider that an additional and less obvious aspect may be driving Apple and Google privacy-based strategies.

Apple and Google are CNPs. As such, they have platforms through which they collect, use and monetise users’ data. However, Apple and Google also own the largest digital distribution platforms – the AppStore and Google Play, respectively (the “Marketplaces“). Other CNPs rely on these Marketplaces, which are governed by the terms prescribed by Apple and Google, in order to reach out to the end-users. In simple terms, Apple and Google have the keys to the gate, and if you want your App on users’ devices, you must abide by their rules.

That means that the privacy-based strategy adopted by Apple and Google could provide them with an unfair advantage over other CNPs. Remember that some of the measures that Apple and Google want to implement are not prescribed by law but are instead a form of “self-regulation”.

Consequently, there is a risk that Apple and Google could impose stringent measures on other CNPs through the terms governing their Marketplaces, while at the same time limiting themselves to less stringent standards; namely, those prescribed by law. This eventuality has not gone unnoticed, with Facebook already expressing its concerns and accusing Apple of anticompetitive behaviours. It is important to note that, while there may be merits to this argument, Apple’s dominant position in the market is likely to result in claims for anticompetitive practices (see for example, the Epic Games saga).

While this particular aspect is as equally interesting as it is controversial, that should not detract from the main point. A privacy-based marketing campaign and a trust-based business development strategy can present valuable opportunities for businesses of all kinds, including small and medium enterprises.

Privacy can be a conduit to building trust and strengthening the relationship with the users. It is, therefore, important for companies to form an effective commercial strategy around privacy and data protection.