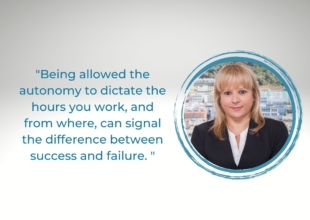 Marked annually on March 8th, International Women’s Day is a global day celebrating the social, economic, cultural and political achievements of women coupled with a call to action for accelerating gender parity.

In support of the #IWD2021 #ChooseToChallenge campaign, over the course of the next week or so, Hassans will be publishing a series of spotlight videos and interviews which explore the candid views and experiences of members of our team, looking at the factors they feel contribute to gender bias, and to urge all women, and men, to challenge inequality, call out bias, question stereotypes, and help forge an inclusive world.

Spotlight #2 is Gillian Guzman QC, a Partner in the firm’s Litigation team. Gillian was Gibraltar’s first female QC and also the jurisdictions’ youngest appointee to date. Thank you Gillian for sharing these with us.

To what extent does the legal profession in Gibraltar remain largely male dominated?

I would say that at the top and middle level tier the legal profession remains very much male dominated. That is evident both in the courtroom and in the boardroom. The fact that 9 years after my appointment as Gibraltar’s First Female QC I remain the only appointee speaks volumes. In my view part of the reason is that there comes a point in a female lawyers career where they are torn between furthering their career or starting a family. Most decide to have a family and they either cease to practice or alternatively, the struggle of balancing both the demands of the profession and their family commitments means that something has to give and their professional ambitions give way to the need to prioritise their family life.

What lessons have you learned that you would share with younger women in your profession?

That the presence of sexism and gender inequality is a fact. That it will be present during their careers in different guises, at times in such subtle ways that it almost goes by unnoticed whilst at other times it will be right in their face. That often it will not be intended though that will not make it feel any less degrading or offensive. Having said this that ultimately if they focus on their work and on doing the best job they can even if the pendulum is swung against them they can still rise above it and shine.

That they need not chose between having a successful and active career and having a family. One is not incompatible with the other. It is all about balance and about being able to separate one from the other and giving both your all.

That there is hope for the future because the younger generation are eroding many of the barriers to inclusion that remain.

Do you think remote and flexible working contribute to women’s success in the workplace?

Yes, it does. Being allowed the autonomy to dictate the hours you work and from where can signal the difference between success and failure. Employers with the necessary emotional intelligence that thrive on a diverse and inclusive workforce can see that and they will embrace remote and flexible working practices that will allow women to be real contributors.

What is your vision for 2030 in terms of equality of the genders?

I envision a society where opportunity and success is based on pure merit and not influenced by gender. One in which being the “First” in a profession is no longer talked about because there have been so many to follow that it has become the norm.

What advice would you give to your 18 year old self?

– that how you are viewed may be premised on perception or prejudice but that ultimately no one is better than you, the same yes but not better;

– that it is not about who your parents are, whether you look the part or whether you have outstanding academic grades but about whether in the “real” world you can exercise good judgment and you can actually do the job. If you can you will be respected;

– to be true to yourself always;

– to be humble and stay grounded;

-that gender inequality will never feature in the courtroom – we are all equal under the law.

– that being an advocate entails a huge responsibility that you must be prepared to exercise without fear or favour because being the voice box for those who cannot assert their own rights or indeed defend themselves is a real privilege.

– that what defines you is not your success but how you manage disappointment and failure.