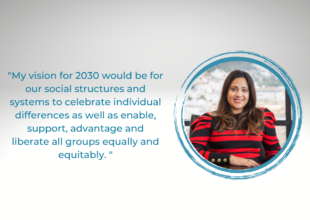 Marked annually on March 8th, International Women’s Day is a global day celebrating the social, economic, cultural and political achievements of women coupled with a call to action for accelerating gender parity.

Over the course of the week as part of the #IWD2021 #ChooseToChallenge campaign, we are publishing a series of spotlight videos and interviews which explore the candid views and experiences of members of our team, looking at the factors they feel contribute to gender bias, and to urge all women, and men, to challenge inequality, call out bias, question stereotypes, and help forge an inclusive world.

Spotlight #5 is with Meera Aswani, an associate lawyer in Hassans’ Property team.  Many thanks to Meera for your contribution to IWD2021.

Many people have been inspired by the election of the first female vice president of the United States this year. Does the world need more female leaders?

The COVID-19 pandemic has shown the true colours of our world’s leaders – a recent study indicates that countries with female leaders such as Denmark, Finland, New Zealand and Germany handled the pandemic better than their male counterparts by taking quick, decisive and coordinated measures which led to lower death rates. Further, research demonstrates that listed companies where at least one third of the executive board are comprised of women have a greater profit margin. The data therefore demonstrates that the world absolutely needs more female leaders and that leadership is not gendered but rather relates to an individual’s attributes.

How can challenging gender stereotypes and biases benefit everybody (and not just women)?

Households in which partners fluidly switch roles – i.e. from breadwinner to caregiver – demonstrate to the next generation that such roles are not gendered. Men too benefit from challenging gender stereotypes as the benefits of paternity leave and shared parental leave are being seen. Culturally, there is a move away from toxic masculinity – the idea that manliness equates to domination and aggression – and a move towards supporting men’s mental health with a view to curb the higher rates of suicide amongst men.

What can we do today to help the women of future generations succeed?

It is imperative that we acknowledge and raise awareness of the unconscious bias against women and the systemic barriers faced by women which hinder their progress. We need to actively work to break down systems of oppression faced by women including looking within our own selves to see how these show up within us. We must also encourage ambition in young women and provide role models for them by increased representation of successful women across all fields. We also need to believe the stories told by women and treat their unique trauma to support them to achieve success – whatever that might mean for them.

What is your vision for 2030 in terms of equality of the genders?

There would be a wider understanding of the unfair social structures and systems which advantage one group to the disadvantage of another as well as how these intersect with one another. True equality would include equality in terms of race, age, class, disability, ethnicity, religion and sexual orientation. Gender equality must also include equality of transgender women. My vision for 2030 would be for our social structures and systems to celebrate individual differences as well as enable, support, advantage and liberate all groups equally and equitably.

What advice would you give to your 18 year old self?

I would advise her that challenging injustice is a long and arduous process which requires a great deal of patience and tolerance and understanding other’s lived experiences and perspectives. I would urge her to appreciate the sacrifices of all the women and the support of all the feminist men which have paved the way for her future endeavours.

In the next instalment of our Coffee Break Catch Up series, we speak to Meera Aswani, a Senior Associate in our Property Team.  Meera joined Hassans in 2016 after working […]