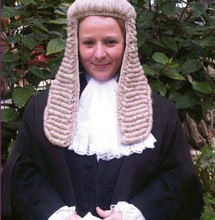 Today celebrates International Women’s Day with #breakthebias the hashtag being lauded around social media. Aptly, today also sees the 10-year anniversary of Hassans’ Partner Gillian Guzman taking silk, not only the first female to do so, but also the youngest appointee – a true trailblazer in the #breakthebias stakes.

Gillian knew from a young age that she wanted to pursue a career in law, and she would be the first in her family to do so. Having been raised in a family whose moral fibre staunchly advocated to “sticking with what she believed in”, she fearlessly dedicated herself to achieving her goal and after studying at University of Wales, Cardiff, Gillian was called to the bar in 1994. Today she leads a dedicated team at Hassans advising on common law cases, human rights, family law, employment, personal injury and clinical negligence amongst other areas. She has developed a market leading practice undertaking extensive and challenging court work before all court tiers in Gibraltar and supports clients from all walks of life, from lay individuals to corporate entities.

Since she took silk, Gillian has also developed and is recognised as a leading advocate in Child Care cases having represented the Guardian ad Litem looking after the best interests of vulnerable local children before the Gibraltar Courts. This is an area of practice which she finds particularly rewarding. Gillian is also a qualified mediator and founder member and Chair of the Gibraltar Middle Temple Association and the Gibraltar Family Lawyers Association in addition to sitting on numerous Public Service Boards.

When Gillian took silk 10 years ago, her desire at that time was to see more female lawyers in Gibraltar join the QC family. Whilst the ratio of female:male QC appointments in the UK has improved (41% of appointed QCs in the UK were female in the last round of appointments) in Gibraltar, female QCs, bar Gillian, remain elusive. On International Women’s Day last year, Gillian commented on this disappointing statistic:

“The top and middle level tier of the legal profession remains very much male dominated. That is evident both in the courtroom and in the boardroom. The fact that 9 years after my appointment as Gibraltar’s first female QC I remain the only appointee speaks volumes. In my view part of the reason is that there comes a point in a female lawyers career where they are torn between furthering their career or starting a family. Most decide to have a family and they either cease to practice or alternatively, the struggle of balancing both the demands of the profession and their family commitments means that something has to give and their professional ambitions give way to the need to prioritise their family life.”

As a highly successful lawyer, we asked what advice she would give to young women considering entering the profession, and possibly aspiring to reaching the standing that Gillian has achieved in her own career.

As Gillian herself once said “professional success means little unless it can be shared”, and we’re very happy to share her achievement and wish Gillian continued success as one of Gibraltar’s most respected lawyers. With an impressive number of highly talented female lawyers within the jurisdiction, we hope to see a rise in female QC appointments over the next ten years.